Traders at the Buntong wet market are having nightmares due to thieves breaking-in and stealing their supplies.

IPOH: Traders at the Buntong wet market here are being targeted by thieves, with fish, vegetables and other fresh produce stolen.

According to vegetable seller Choong Ah Huat, the situation has gotten worse in the last two months, with traders suffering losses when their supply is stolen, about once every two weeks.

He said traders have been losing between RM200 and RM300 each time.

"We suspect the thieves come very early in the morning. Although we keep our items inside our stores, they manage to break in, leaving us with no choice but to keep the vegetables inside our vans.

"There are many entrances to the old market, with no guards nor are there closed-circuit television cameras installed," he said.

A mutton seller, who only wished to be known as Calawiah, in his 40s, said he did not keep meat in the store, but his meat hooks and weighing machine had been stolen many times.

He said the market needed upgrading and proper security services hired to stop thieves from entering the premises at night.

"We traders pay a monthly rental fee to the Ipoh City Council. I hope something will be done to overcome this problem," he said.

A fishmonger, who only wished to be known as Saba, 39, said he suffered RM800 in losses.

He said the wholesaler had left the supply beneath his stall, but when he came in the morning to open his stall, the fish had gone missing.

"It is very frustrating. We are earning an honest living, but our supplies just go missing," he added.

DAP Buntong 2 branch chairman M. Rajagopal said some of the traders have lodged police reports, with others complaining to the council as well.

"Most wet markets have been upgraded, but the Buntong market is still old and dilapidated.

"The normal fencing is not preventing thieves from breaking in," he said, adding that there are six entrances to the market. 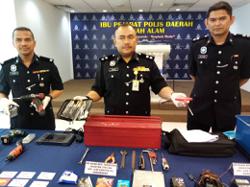