He said on Thursday (Aug 6) the notices were issued in 270 operations conducted throughout the state.

Veerapan, who also holds the environment, cooperatives and consumerism portfolios, said offenders had to pay fines totalling RM284,850 for the offences.

He said 834 notices were issued to those caught smoking in these premises, which was an offence under Regulation 11(1)(d) of the Tobacco Control Regulations 2004.

"The smokers were slapped with fines totalling RM208,500 for smoking in a prohibited area which they have to pay, failing which they will be charged in court," he said in a statement.

Those convicted can be fined up to RM10,000 or jailed up to two years or both.

He said 100 eatery owners were also issued notices for failing to stop smokers from lighting up in their premises.

Veerapan said 92 owners were also issued with notices for failing to put up no-smoking signage in their outlets, while another 57 minors were fined for smoking.

"We continued with the enforcement despite the movement control order and the recovery MCO as we are serious to enforcing the no-smoking law in prohibited places such as eateries.

"We would also like to urge the people, especially the non-smokers, to safeguard their rights and politely reprimand those who light up in these areas," he added. 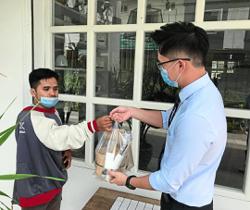