KUALA LUMPUR: The High Court was told that Datuk Seri Najib Razak approved the appointment of one Mohd Hazem Abdul Rahman who was set to become an executive director in 1Malaysia Development Bhd (1MDB) in 2012.

The witness said the CV included a personal notation by Najib that said Hazem should be made “executive director”.

(Under 1MDB’s Article 117 of the Memorandum & Articles of Association, the prime minister’s approval is needed for the power to hire and fire.)

"I clarified that there was no executive director position in 1MDB at the time, and I proposed for him to be made the chief operating officer (COO), ” Shahrol said.

Shahrol added that when Hazem came on board as COO, he was given responsibility for real estate, while Shahrol as CEO focused on the energy business.

In 2013, Shahrol moved to the Performance Management and Delivery Unit (Pemandu) — now defunct — and his positions as the CEO and managing director were filled by Hazem.

In 2015, Hazem resigned as 1MDB CEO and was replaced by Arul Kanda Kandasamy.

Wan Aizuddin: I put it to you, Jho Low had suggested the appointment of Hazem for the purpose of continuing the scheme to embezzle money from 1MDB.

Wan Aizuddin: Hazem was appointed to succeed you as CEO as a way of passing the baton from one person (to another) to be told by Jho Low on what to do.

The hearing before Justice Collin Lawrence Sequerah continues on Aug 17. 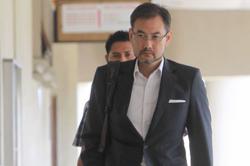