KLANG: The photo of an upside-down Jalur Gemilang was taken without context as the mistake was rectified on the spot, say police.

North Klang OCPD Asst Comm Nurulhuda Mohd Salleh, in a statement Tuesday (Aug 4), said that investigations showed that the flag was attached to a wooden pole by an Indonesian permanent resident and a local woman on August 3 at a school in Batu 4, Jalan Kapar.

"After the flag was put up, the worker then came down to check the position of the flag and noticed that it was upside down. The worker immediately took down the flag and reattached it correctly within 10 minutes.

"However during that short time, an individual who so happened to be outside the school gate took a photo of the upside-down flag and uploaded it online while also stoking racial sentiments without checking beforehand," she said.

She also advised all to stop sharing the photo.

"The school has made a police report denying that it had purposely attached the flag upside down," she said. 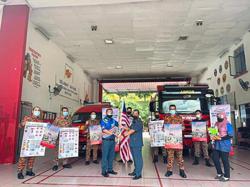