KOTA KINABALU: A Tawau man who was planting cannabis inside flower pots at his home has been arrested by police.

Sabah Police Commissioner Datuk Zaini Jass said on Tuesday (Aug 4) that the 43-year-old man was arrested after a police narcotics team from Tawau police headquarters conducted a swoop at his house at Taman Megaria around 5.30pm on Monday (Aug 3).

He said the plants, about 126cm to 198cm in height, were placed in pots behind the man’s house.

Police also seized a plastic packet containing dried leaves believed to be cannabis leaves weighing around 29.52g in the living room of the house.

Speaking to reporters at the Kepayan state police headquarters, he said the man claimed that the cannabis seeds were obtained from Selangor and it was for personal use.

Police have also seized the man’s Ford Ranger, Toyota Hilux and a Harley Davidson motorcycle worth about RM250,000.

The case is currently being investigated under Section 6B of the Dangerous Drugs Act 1952 for growing cannabis and if charged and convicted, he could face a minimum jail term of five years or life imprisonment and a minimum of six strokes of the rotan.

In another drug-related case, Zaini said that police seized an unclaimed parcel that contained 110g of syabu from a post office in Menggatal here on Monday.

Zaini said police decided to confiscate the parcel as no one had come forward to claim the items since July 22. 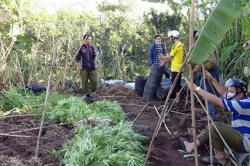