Witness Rayyan Radzwill Abdullah, 40, a business partner of Jepak managing director Saidi Abang Samsudin, said this during the cross-examination by counsel Datuk Akberdin Abdul Kader in the trial of the wife of former prime minister Datin Seri Rosmah Mansor in connection to the solar energy project.

Akberdin: We already know the role played by Mahdzir in this project. Because of this, I state that he asked for 20% from Jepak as payment.

Rayyan Radzwill: Yes, through his friend named Md Fuad Yasin, and he (Md Fuad) was one of the individuals who was present during the first technical meeting (on the project) at the Education Ministry.

Akberdin: Do you remember or not, because 20% was huge, Saidi said it cannot be entertained because (20%) was too high. After discussions, the 20% was reduced to RM60mil for five years or RM1mil for 60 months.

The 16th prosecution witness was testifying in the corruption trial of Rosmah, 68, who is facing a charge of soliciting RM187.5mil and two other charges of receiving bribes of RM6.5mil from Saidi.

The bribe was received through her then-aide Datuk Rizal Mansor as gratification for helping Jepak Holdings secure the Hybrid Photovoltaic Integrated System and maintenance and operation of genset-diesel worth RM1.25bil for 369 rural schools in Sarawak through direct negotiation with the Education Ministry.

In his previous testimony, Mahdzir who is also the fifth prosecution witness denied the allegation by Rosmah’s counsel that he received RM60mil from Jepak Holdings as gratification for assisting the company secure the solar project.

"As payment for the services given by Datuk Aazmey, Jepak drew up a consulting service agreement with him for the gratification that should be given to him, ” Akberdin said, to which Rayyan Radzwill agreed, adding that he prepared the agreement on behalf of Jepak Holdings.

At one point, the witness became emotional when he said that from the beginning, he did not agree with the act of offering large sums of money to politicians to secure the project.

Rayyan Radzwill said he agreed to help Saidi in the technical work to secure the project because he came from a poor family who constantly suffered electricity disruptions.

"I told Saidi not to give money to them (politicians) but if you want to give, then give it to their areas, but Saidi was stubborn and said this (giving money) was necessary in order to secure a project.

"That is why many dealings of giving money (by Saidi) was outside my knowledge. When there was fraud about the terms of the project, I was called to lodge a police report, ” he said. 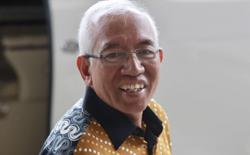