JAKARTA: Indonesian police have brought Djoko Soegiarto Tjandra (pic), a fugitive and graft convict who had been on the run for 11 years, back to the country after he was arrested in Malaysia.

Bareskrim chief Geneneral Listyo Sigit Prabowo said the arrest was made possible through cooperation between Indonesian and Malaysian police.

“Indonesian police chief sent a letter to Malaysian police to help find the fugitive and Alhamdulillah (thank God), we managed to locate him (on Thursday) afternoon, ” he said in a televised statement after arriving at the airport.

He thanked Malaysian police for their cooperation.

Djoko was first arrested in September 1999 for his involvement in the high-profile Bank Bali corruption case.

He was acquitted by the South Jakarta District Court in 2000.

After the Attorney General Office filed a request for review, the Supreme Court sentenced Djoko to two years of imprisonment in 2009 and ordered him to pay 546bil rupiah (RM157mil) in restitution.

However, Djoko fled to Papua New Guinea a day before the court ruling and had remained at large ever since.

Djoko recently made headlines as he managed to return to the country undetected and request a case review over his conviction with the South Jakarta District Court in early June.

He reportedly filed his plea after obtaining a new electronic ID

card and passport, in addition to having his Interpol red notice status lifted.

The court, however, dropped his case review plea on Tuesday after Djoko, who was reported to be residing in Malaysia, failed to show up for the hearing four times.

Djoko’s legal team said the fugitive was not able to attend the trial due to his poor health. — The Jakarta Post/ANN 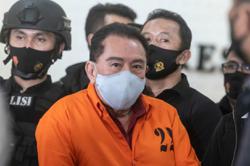 Minister: Arrest of fugitive Djoko Tjandra in Malaysia took a week to plan