SIBU: Nine foreign masseuses, aged between 29 and 33, were detained in an anti-vice operation at a health centre on Jalan Mahsuri on Thursday (July 30).

Six of them are from Vietnam and three from China.

Also arrested during the 3.15pm raid was the 30-year-old operator of the centre, a Chinese national.

The police anti-vice squad led by CID chief, DSP Hadian Keria, also nabbed two counter staff members, a 25-year-old man and a 28-year-old woman, both of whom are local.

Sibu Deputy OCPD, Supt Collin Babat said on Friday (July 31) that all of the suspects were detained for defying the recovery movement control order (MCO) under Regulation 10 of the Prevention and Control of Infectious Diseases (Measures Within the Infected Local Areas) Regulations 2020.

"The centre did not comply by the SOP as the guidelines were not followed. Among them was the need for temperature scanning, the practice of social distancing, the provision of hand sanitiser, and the need for a log book to record name and contact number of their customers," he said.

The 12 suspects have been remanded and are also being investigated under Section 372B of the Penal Code for conducting immoral activity in the premises and under 39(b) and 39(b) of the Immigration Regulation 1963 and Section 6 (1) (c) and 55B of the Immigration Act 1959/63.

The police also seized a CCTV decoder together with cables, a handphone, two identity cards and two handbags.

"A 25-year-old sundry shop operator, who was a customer of the centre, was also detained. He was, however, released after we recorded his statement," he said.

Supt Collin added that similar operations were also carried out at three other health centres by another anti-vice squad.

Ten masseuses from these three centres, including six Vietnamese and four Filipinos, were brought to the central police station.

They were later released after documentation was done. 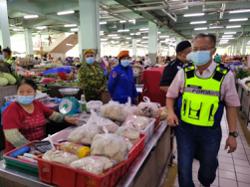 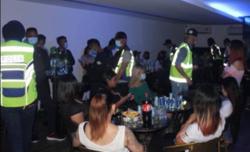