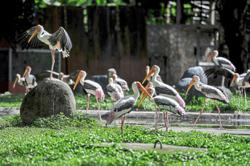 The financial contributions helped Zoo Negara cover its daily expenses and needs, said His Majesty during a visit to the zoo yesterday.

The royal tour started with Sultan Abdullah watching an animal show at the amphitheatre, followed by a presentation ceremony of mock cheques from several local companies.

Before concluding the visit, His Majesty visited the Giant Panda Conservation Centre and fed two giant pandas, Fu Wa and Feng Yi, which were loaned by the Chinese government in 2014 through the Joint Giant Panda International Conservation programme.

It was reported the movement control order which started on March 18 had affected Zoo Negara as lack of donations and ticket sales forced it to utilise its emergency fund to cover operating costs.

Rosly, however, said all animals in the zoo were healthy and in

“It is a big challenge for us to cover the zoo’s operating costs during this temporary closure as Zoo Negara relies on ticket sales, space rentals, corporate sponsorships and public donations,” Rosly had said then. 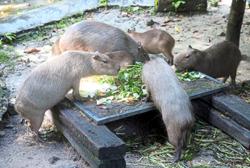