Azalina: Five, four, three, two, one! Sit down! Sit down!

KUALA LUMPUR: Datuk Seri Azalina Othman Said (pic) stood her ground as the Deputy Speaker when she ordered a defiant RSN Rayer to take his seat – in five seconds.

During the debate on the Royal Address, Rayer (PH-Jelutong) stood up to interrupt Datuk Salim Sharif’s (BN-Jempol) speech when the latter claimed that during Pakatan Harapan’s 22-month administration, assets were sold and public welfare was decreasing.

Salim refused to give way, prompting Rayer to threaten to use the Standing Orders.

“This is Jempol’s floor, sit down and let him answer, ” she said.

Rayer questioned if she was going to allow Salim to proceed with his remarks, triggering a shouting match involving Rayer, Salim and Datuk Seri Bung Moktar Radin (BN-Kinabatangan).

An angry Azalina then retorted: “Jelutong, I know you are a learned counsel but I’m the speaker chairing.

“Under Standing Order 35, you must allow the chair to make the decision whether you can stand or even ask questions.”

“Don’t hijack the microphone... please have some respect, ” she said.

Rayer wanted to rebut her but was cut short by Azalina.

“See, I’m not finished yet and you intervened. Please sit down and let me finish. I have asked Jempol to reply and it’s up to him whether he wants to reply or not. It’s his floor, ” she said.

She added that on her watch, many opposition leaders had debated and made many allegations.

“It’s okay, this is democracy, let them speak, ” she said.

Rayer then pleaded to Azalina to allow him to finish his statement but it was swiftly rejected.

“There’s no reason for you to be angry at me, ” he told the Deputy Speaker.

A visibly angered Azalina then asked: “Are you challenging me?”

She then issued an ultimatum demanding that the DAP lawmaker sit down.

“I’m not going to put an order on you.

“Either you sit down or I’ll get the sergeant-at-arms to get you out.

Rayer then appealed to Azalina to cool down as he proceeded to sit down.

“Of course, I’m angry. I’m human. Sit down and let Jempol speak because time is running out, ” she said, before allowing Salim to continue his speech.

A vocal lawmaker, Rayer often crosses swords with MPs from the opposing camp. 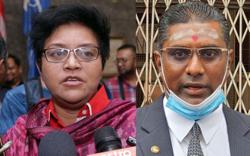 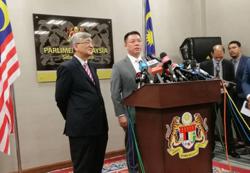