SEPANG: Two men believed to be drug mules were arrested at the Kuala Lumpur International Airport 2 prior to their departure to Miri, Sarawak, for carrying syabu which were hidden in Chinese tea packets.

KLIA OCPD Asst Comm Zulkifli Adamsah said the first suspect, aged 22, was arrested near the departure area at 3.45pm on Wednesday, which led to the arrest of the second suspect, aged 19, at the main entrance at 4.15pm.

ACP Zulkifli said both suspects are believed to be from the same syndicate based in Sarawak.

“The two have no criminal records, and are believed to be paid RM600 by the syndicate for every kilogramme of drugs they smuggle into Sarawak,” he said.

Zulkifli said the district police would cooperate with the Selangor Narcotics CID to track down the supplier and syndicate. — Bernama 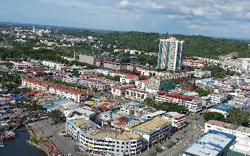