Head of accounts who forged boss’ signature gets jail

Inside job: Teo being escorted by a police officer at the Sessions Court where he pleaded guilty to 123 counts of CBT.

KUALA LUMPUR: A former head of accounts who forged his boss’ signature in a criminal breach of trust (CBT) involving RM5.5mil was sentenced by a Sessions Court here to five years and six months in jail.

Teo Chee Peng, 53, was also slapped with a RM283,500 fine in default of 567 days in prison. He had earlier pleaded guilty to 123 counts of CBT on July 6 and yesterday was fixed for sentencing.

According to the charge sheet, Teo was accused of CBT in his capacity as the company’s head of accounts at that time by issuing cheques totalling RM5,502,414 to Revolusi Angkasa Sdn Bhd by forging the signature of the company director, 64-year-old Yap Choon Lai. He committed the offences at an office in Taman Niaga Waris here between May 12,2012 and March 17 this year.The charges were under Section 408 of the Penal Code, which carries a maximum of 14 years’ jail time and whipping upon conviction.

Prior to sentencing, Deputy Public Prosecutor Siti Nur Hajar Hamzah informed the court that the Attorney General’s Chambers had taken into account a representation sent by the accused. She said after perusing the representation, the prosecution agreed for the court to “take into consideration” (TIC) on 42 charges while it proceeded on the remaining 81 charges.

Lawyer Tia Poh Yew, who represented the accused, said his client had fully cooperated with the police and extended the cooperation further by transferring back valuables and writing a confession letter to the complainant.

The court was also informed that Teo had since transferred two immovable properties – a landed property and a condominium – with a combined value of up to RM2mil and a luxury car with a RM400,000 purchase price to the complainant.

Tia said his client was in the midst of transferring a third property, which was a condo unit valued at RM500,000, to the complainant.

Sessions Court judge Hasbullah Adam said the court took note of the accused’s effort to make amends and the prosecution’s request on the 42 charges to be taken into consideration into sentencing.

“I convict you on the 81 charges and take into consideration the other 42 charges for sentencing. I hereby discharge and acquit you on the 42 charges, ” he added.

If the accused fails to pay the fine, he would be jailed seven days for each of the charges.

Due to the accused’s age, Teo was not liable to whipping. 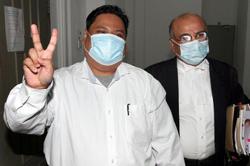 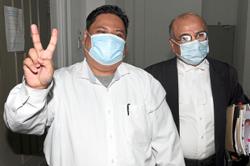