Jelutong MP R. S. N. Rayer, who is acting as Lim's lawyer, said the latter is unwell and had obtained an MC for today and tomorrow.

"However, since he received the notice from the MACC, he came anyway.

Earlier, Lim, who was summoned by MACC investigators, arrived at around 1.05pm Wednesday.

Graft investigators had so far questioned close to a dozen people over the case.

It is believed that the MACC is looking into why the state government allowed the Penang Tunnel special purpose vehicle (SPV) company to pre-sell state land rights worth RM3bil despite a four-year delay in the construction of roads. 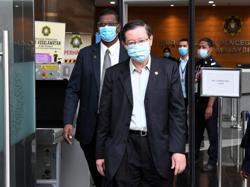