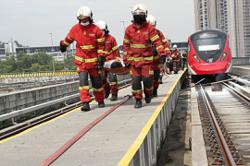 KUALA LUMPUR: A key milestone for the MRT Putrajaya Line (formerly known as the Sungai Buloh-Serdang-Putrajaya line) was achieved last Friday when a final tunnel boring machine (TBM) broke through the wall of the upcoming Ampang Park MRT station.

The 1,100-tonne machine had travelled for over 700m from its starting point at Conlay Station, when the movement control order was imposed on March 18. The machine finished the rest of its 200m journey during MCO with special approval from the authorities. Senior management heads from MMC Gamuda and MRT Corp at the spot where the S-774 tunnel boring machine broke through.

The bulk of the challenge came from the rather difficult geological terrain that the TBMs – 12 in total for the Putrajaya Line – have to pass through in their 13.5km underground journey that traverses nine stations and two provisional stations.

“The Putrajaya Line underground alignment is more difficult to design and build, compared to the Kajang Line alignment, which consists of a rather well-defined zone of either Kenny Hill or KL limestone, with a difficult transition zone at the Bukit Bintang area, ” said MMC-Gamuda’s project director for Putrajaya Line, Datuk Ir Wong Wai Ching. As the Putrajaya Line geology is a lot more complex, its underground alignment was more difficult compared to the Kajang Line alignment, said Wong.

“In contrast, the Putrajaya Line geology is a lot more complex. The tunnels are typically deeper; there are more structures, utilities and objects underground; and stations have to be built close to existing high-value or important buildings, ” he said.

In the end, the intermittent changes of geological formations on the tunnel face and mixed-face conditions accelerated TBM cutter head wear, increased the risk of ground settlement, introduced tunnel face stability problems, made the conditioning of tunnelling muck more difficult, as well as posed groundwater inflow into the worksite.

“Although preliminary geological studies indicate that the Putrajaya Line karstic geology is similar to that of the Kajang Line, we experienced significantly more challenging ground conditions in terms of virtually undetectable geological troughs and mixed face conditions, ” said Wong.

The very abrasive granite required frequent maintenance of TBM cutter heads in order to achieve a certain advance rate, while the parts with shallow limestone required many rounds of advanced ground treatment to enable the TBMs to pass through safely, without causing any significant ground subsidence or sinkholes.

Tunnelling for the Putrajaya line also involved more interfacing with existing infrastructure, such as the one at the Tun Razak Exchange (a seamless interchange station) as well as at Chan Sow Lin (interchange with Ampang LRT).

The tunnels are longer – 13.5km with 11 stations – compared to the Kajang Line’s 9.5km with seven stations.

“The scope of work is larger, and delays in one section is more likely to affect many others, although with our customised variable density TBMs that were refined after lessons from building the Kajang Line we were able to re-sequence some TBM drives as challenges surfaced along the way, ” said Wong.

To ensure the tunnelling programme could be on time, up to 12 TBMs were deployed simultaneously at one point to make sure the timeline – full opening of the line by January 2023 – will be met.

“Naturally, operating 12 TBMs all at one go posed its own challenge on resources, people, plant capacity, and material delivery, ” said Wong, adding that Covid-19 threatened to throw the project timeline out of the window at one point. The geological conditions for the MRT Putrajaya Line underground works were much more challenging as six ‘fault lines’ were identified along the underground alignment.

“The MCO came with restrictions that impacted our supply chain and labour force. Covid-19 almost became a showstopper, and it is only through extensive mitigation measures to protect our workforce – such as thorough screening and isolation measures – that satisfied the authorities that our tunnelling activities can be safely carried out while protecting both men and the environment, ” he said.

Despite the reduced productivity due to SOP compliance requirements – Covid-19 testing, regular sanitisation, reduced workforce numbers, reallocation of workers to the Centralised Labour Quarters – additional initiatives had to be put into place for work to progress.

“There were serious disruptions to our supply chain primarily due to certain players not being able to secure approval from the relevant authorities to restart work – including manufacturing, concrete supply, closure of spoil dumping grounds, among others, ” Wong said.

With the wealth of knowledge, expertise and cutting-edge machinery at its disposal now, MGKT is now ready for other urban rails projects, he said.

“The legacy from building two MRT lines include having the only Tunnelling Training Academy in the region (in Shah Alam) and a whole bunch of Malaysian engineers fully conversant in building structures underground.

“We have also fostered the growth of an ecosystem of SMEs and suppliers for the underground construction industry.

“For example, just for the underground sections of the MRT itself, we have nearly 1,000 Malaysian SMEs and suppliers on board, and they are ready to support the country should we embark on more rail construction.

“We are ready to do more so that the people can move about seamlessly for work and play in a future where rail transport is expected to be the norm, rather than the exception, ” said Wong.