“The Occupational Safety and Health Department, the Land Public Transport Agency, the Fire and Rescue Department, the Klang Municipal Council and the Public Works Department were notified immediately.

“There are no casualties reported and the affected area was cordoned off,” said MRCB George Kent Sdn Bhd in a statement on Monday. The cause for the sinkhole is still being investigated.

The firm added that its WPC has briefed the Kampung Johan Setia residents living nearby the area and implemented a Traffic Management Plan immediately to close the affected road and divert traffic until further notice.

“The current traffic diversions are as follows: Motorists from Jalan Pendamaran to Jalan Johan Setia will be diverted to Banting, Klang via contra flow on Jalan Banting Klang (Banting-bound).

“Motorists from Jalan Johan Setia will not be able to access Jalan Banting Klang/Jalan Pendamaran for the time being.

“Meanwhile, motorists from Jalan Banting Klang will not be able to turn right to Jalan Johan Setia.

“Motorists will have to make a U-turn at the KESAS intersection and turn left to Jalan Johan Setia 1,” it said. 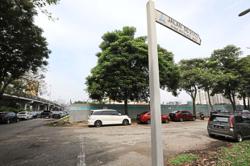