The suspect who was caught moving contraband between the two vehicles behind him.

JOHOR BARU: An Indonesian man's attempt to move some RM162,000's worth of contraband cigarettes was foiled by the General Operations Force (GOF) here.

GOF fifth battalion commanding officer Supt Dimin Awang said the 34-year-old man was arrested around 5.30pm on Thursday (July 16) during a raid along Jalan Kampung Melayu Majidee following a tip-off from the public.

“The suspect was transferring the cigarettes from one car to another when he was caught red-handed.

"Some 431 cartons of contraband cigarettes worth about RM162,000 were seized during the raid and have been handed over to Johor Baru South police headquarters," he said in a statement here on Friday (July 17). 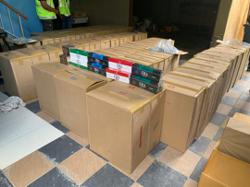 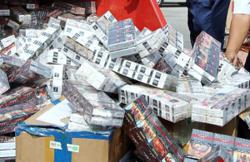 Contraband ciggies worth over RM3.3mil seized