Khusairi was reported to have collapsed while playing golf at the Awana Genting Highlands Golf and Country Resort and was rushed to Bentong Hospital, where he was pronounced dead, and the body brought to his mother’s house here last night.

At 8.30am today, the body was taken to Masjid Al Rahmaniah Felda Sungai Behrang for funeral prayers, which were led by his eldest son, Mohd Amirul Khamil.

Khusairi, who was an Umno supreme council member and the party’s Tanjung Malim divisional leader, left behind his wife Datin Jamilah Nordin and seven children.

In the 14th General Election (GE14), Mohd Khusairi, a four-term assemblyman, retained the Slim state seat with a majority of 2,183 votes against Bersatu candidate Mohd Amran Ibrahim, who contested under the PKR ticket, and Muhammad Zulfadli Zainal of PAS.

Slim is one of three state seats in the Tanjung Malim Parliamentary constituency, besides Behrang and Sungkai. – Bernama 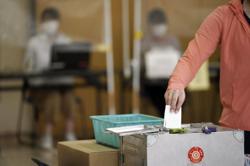