PETALING JAYA: The Malaysian Consultative Council of Buddhism, Christianity, Hinduism, Sikhism & Taoism (MCCBCHST) has told the National Unity Ministry to consult them before setting up a body such as Sarawak’s Unit For Other Religions (Unifor).

MCCBHCST said that while a unit such as Unifor is crucial for Malaysia as religious issues can be resolved through dialogue, as religious stakeholders they should be consulted as to the unit’s structure and composition.

They said this was because all religions enjoy freedom of religion and by Article 11(3) of the Federal Constitution.

“This right forms part of the basic structure of the Constitution and as such cannot be violated, ” they said in a statement on Tuesday (July 14).

Unifor, which was formed in 2017 under the Sarawak Chief Minister’s Department, looks after the affairs, needs and interests of non-Islamic religious bodies in the state, including Christians, Buddhists, Hindus, Sikhs, Bahai and Taoist.

The Malay Mail reported that the National Unity Minister Datuk Halimah Sidique said that her ministry wanted to adopt and adapt the concept of Unifor into their Community Harmony Committee.

MCCBHCST said that the Community Harmony Committee must be separate from this proposed Unifor unit, as the former is under the ministry and has leaders from different religions on board.

“Its precursor is the Committee for the Promotion of Inter-Religious Understanding and Harmony among Adherents (JKMPKA). This JKMPKA was set-up by the Cabinet earlier under the Department of National Unity and National integration and MCCBCHST members were part of this earlier committee together with Muslim religious leaders and others, ” they said.

They added that any unit or body like Unifor to be set-up for non-Muslims must take cognizance of Article 11(3), that it is the right of each religious group to manage its own affairs.

“It thus must be managed by non-Muslims and in case of Sarawak it comes under Sarawak Deputy Chief Minister.

“We, therefore appeal to the YB Minister of National Unity to call for a meeting with MCCBCHST for consultations before a unit/ body like Unifor is set-up, ” said MCCBCHST. 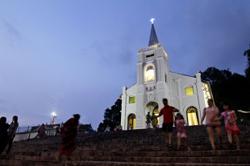 Non-Muslim places of worship in S'wak allowed to have up to 250 people once they reopen on June 20, says Unifor