Fiery words: Khalid speaking during the Parliament sitting. He was later ejected from the House for interrupting Azhar during his inaugural speech. — AZHAR MAHFOF/The Star

CHAOS erupted on the first day of the Dewan Rakyat meeting when MPs from Perikatan Nasional and Pakatan Harapan shouted at each other after racist and sexist remarks were uttered in the House.

The chaos began after Kasthuri Patto (PH-Batu Kawan) alleged that Datuk Seri Abdul Azeez Abdul Rahim (BN-Baling) had made a remark about her skin colour.

She had earlier stood up to question why there was no female representation in the new Select Committee, which was proposed by Prime Minister Tan Sri Muhyiddin Yassin.

“I would like an explanation as to why there isn’t any women in the Select Committee. Under Pakatan Harapan, Dr Wan Azizah was a member. However, under Perikatan Nasional, there is none.

“Are there no women of calibre in Perikatan to be part of this committee?” she asked.

Abdul Azeez stood up and said: “Tak nampaklah, gelap (It is dark, I cannot see).”

Kasthuri did not respond at first and continued asking for an explanation from Azhar on the matter.

Azhar said the matter would be debated first.

RSN Rayer (PH-Jelutong) then stood up, asking for Abdul Azeez to retract his remarks against Kasthuri.

They also wanted the Speaker to make a ruling on the matter.

Abdul Azeez clarified that he did not have any intention to make a racist remark.

However he added: “I said dark, I am also dark. So wear powder. What is the problem?”

Rayer then asked Azhar to issue a ruling on the remark, which he said was unparliamentary.

Kasthuri quoted Standing Order 36 (4) and urged the Speaker to make a ruling.

“First day of Dewan and we hear sexist remarks from Baling, ” she said.

Abdul Azeez then stood up and retracted his remarks against her.

“I will be the bigger person here as I want the proceedings to go on smoothly.

However, the Opposition still wanted Azhar to make a ruling against the Umno MP.

Azhar replied that Abdul Azeez had retracted his remarks and there was no need for a ruling to be made.

Earlier in the day, Khalid Abdul Samad (PH-Shah Alam) became the first MP to be ejected from the House by Azhar.

As Azhar was delivering his inaugural speech as the new Speaker, many Opposition MPs heckled him and questioned why they were not given an opportunity to submit a nomination for their own Speaker candidate.

Many were heard saying “Tak bermaruah (no dignity)” and “Who selected you?!”.

Azhar ejected Khalid from the House for constantly interrupting him during the noisy proceedings. 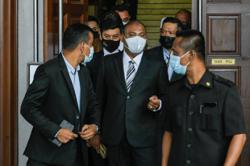