The Transport Minister said the grant came up to a total of RM21mil.

“This scheme is part of the Prihatin initiative that was launched by the Prime Minister on March 27 as a bulwark for the country during economic and social crises as a result of the Covid-19 pandemic,” he said in a Facebook post yesterday.

Dr Wee said the movement control order (MCO) had affected many segments of society as the country continued with its efforts to contain any further outbreak.

School bus operators, he said, were one of the groups that the ministry was assisting to weather the present difficulties through its various measures.

“On May 14, I had a dialogue with several major associations of school bus operators to gather their feedback for further action,” he said, adding that his political secretary had also met the operators yesterday to further resolve pending issues affecting the industry.

Dr Wee said the aid would be given to the bus drivers with valid licences who use registered vehicles from licensed school bus operators.

“The disbursement mechanism will be announced in due course by the Land Public Transport Agency, which is in charge of distributing the assistance,” he said.

“We would like to express our appreciation to the Finance Ministry for their cooperation in helping affected industry players,” he added.In a separate post, Dr Wee said that he had a fruitful discussion with Malaysia External Trade Development Corporation (Matrade) chairman Tan Sri Halim Mohammad, who visited his office yesterday.

“We spoke at length about the aviation and maritime industries.

“He is humble, softspoken and a successful entrepreneur. His flight training centre has produced 1,500 pilots so far,” Dr Wee said, adding that Halim was also a former seafarer, who owns a private higher learning institution to train professionals in the maritime sector.

“He aspires to help the government to train more maritime professionals very much needed by the industry now.

“His leadership should be exemplified by all, especially those who want to venture into the aviation and maritime sectors,” he said. 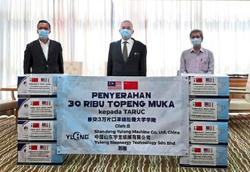