The government grant, he said, came up to a total of RM21mil.

“The government has approved a grant of RM600 special assistance each for 35,000 eligible school bus drivers nationwide.

Dr Wee said the movement control order (MCO) has affected many segments of society in the nation’s continuing efforts to contain further outbreaks of the Covid-19 pandemic.

School bus operators, he said, is one of the many groups that the ministry had been attempting to help weather this period of uncertainty through various measures.

“In fact, I had met with several major associations of school bus operators in a dialogue on May 14 to gather their feedback for further action, ” he said.

Dr Wee added that his political secretary had met them on Friday to continue to engage with the operators to further resolve pending issues facing the industry.

Dr Wee noted that the assistance will be given to school bus drivers with valid driver licences and using registered vehicles from licensed school bus operators.

“The disbursement mechanism will be announced at a later time by the Land Public Transport Agency (APAD), which is the ministry’s agency in charge of distributing the assistance, ” he said.

He noted that the ministry has since proposed additional allocation to help additional groups affected by the MCO.

“We would like to note our appreciation to the Finance Ministry for their cooperation to help affected industry players during the MCO, ” he added. 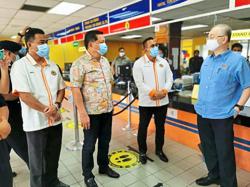