BALIK PULAU: The King of Fruits nearly became “a killer” when it hit a lorry, injuring two men and causing the driver to lose control of the vehicle.Air-conditioning technician Lim Chai Huat, 43, and a Bangladeshi co-worker were injured when a “flying durian” landed on the lorry they were travelling in at 9am on Thursday.

Both men received treatment at Balik Pulau Hospital. Chai Huat was wounded in the head and hands, while the foreign worker hurt his hands and legs.

Their employer Lim Beng Huat, 44, said Chai Huat was driving the lorry at the time.

He was with two Bangladeshi workers and they were on their way to Balik Pulau from Paya Terubong for an air-conditioning service appointment.

“While they were approaching Balik Pulau at a winding stretch, a durian flew into the lorry and hit Chai Huat in the head before landing on the hands and feet of one of the Bangladeshi workers,” said Beng Huat.

“Chai Huat lost control of the lorry and hit a car parked on the left side of the road.

“I suspect that the fruit may have fallen off a tree or fell from an oncoming vehicle which was ferrying durians.

“The fruit landed inside the lorry because the window on the driver’s side was down at the time,” he added.

He said the other Bangladeshi worker, who was sitting in the back of the lorry, was unhurt.

“I lodged a police report about the incident at 2pm on Thursday. I am just relieved that nothing serious happened,” he said.

The durian season in Balik Pulau is mainly around June until the end of July. 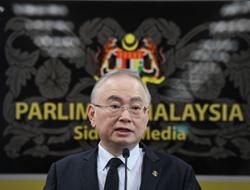 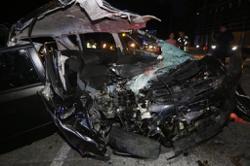