BACHOK (Bernama): The eighth and final victim who drowned in the capsized boat incident on Monday (June 29) has been found near Pulau Perhentian.

"The fisherman then contacted the MMEA boat nearby, which was also actively looking for the victim," he told reporters when met at the SAR operations centre in Kuala Kemasin here.

Muhd Nur Syam, who is also the commander of the search and rescue (SAR) mission, said Arman's body was discovered about three nautical miles from where the remains of his friend, Che Wadi Bakar, 44, was found earlier today.

He said the identity of the body was confirmed by family members as well as from a wallet containing the victim’s identity card.

He said the body was later sent to the Raja Perempuan Zainab II Hospital in Kota Bharu for a post-mortem.

Muhd Nur Syam added that the SAR operation had officially ended following the discovery of the last victim.

"The success in finding all the missing victims with the cooperation of local fishermen will become a model for rescue work in the future," he said.

In the 8pm incident on Monday, a boat carrying 20 anglers including the skipper capsized after it was hit by big waves in a storm. Twelve of the victims, aged 18 to 60, survived. - Bernama 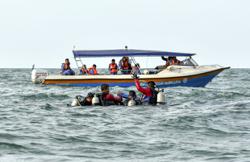