Dr Wee said during the meeting, they discussed efforts to upgrade the Batu Berendam Airport, the Melaka Port and the reclamation project at Tanjung Bruas port.

"As a former deputy transport minister from 1995 to 1998, Ali is a leader who had fought for the setting up of the Road Transport Department training institute in Melaka.

"We also discussed amendments to the Road Transport Act 1987, especially on imposing stiffer punishment against those who drive under the influence of alcohol, drugs or drive in a reckless or dangerous manner," he said in a Facebook post Saturday (July 4).

On June 22, Dr Wee said he will bring a memorandum to Cabinet to amend the Act in a bid to deter more people from driving under the influence (DUI).

The punishments for DUI and reckless driving are set to become heavier as the Transport Ministry seeks to amend the Act.

A special meeting chaired by Dr Wee on June 1 discussed amendments on Section 41 to 45 of the Act.

Musa: I have the numbers 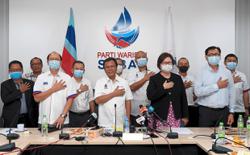