PETALING JAYA: Families are looking forward to having a splashing fun time at theme parks and water parks since they are allowed to operate.

Housewife Nizawati Abdin, 58, will be bringing her seven-year-old daughter and 11-year-old son to the Sunway Lagoon theme park when it reopens this Saturday.

“I thought the water park will be open on July 1, but turns out it will open on Saturday. I’m planning to bring my kids there then.

“We went to see the animals at the zoo here instead, ” she said when met at Sunway’s wildlife park with her children.

The Sunway Lagoon theme park – including Extreme Park, Water Park, Amusement Park, Scream Park and Nickelodeon Lost Lagoon – will be reopened this Saturday after being closed since March.

Its wildlife park had already opened for about a few weeks because zoos were allowed to operate since June.

Nizawati said she wanted to take her children out since they had been stuck at home for a long time.

“This is the first time we are out because the kids were bored at home doing just homework.

“So, I just want to spend time with them since the public is still not going out in full force as we went to the park during working hours, ” she said.

Couple Tan Sung Lin and Gladys Tan, both 29, brought their toddler to the Sunway Lagoon wildlife park for a family outing.

“We heard from a friend that the park is really nice, very close by. It is not too expensive and there are many animals, so we decided to try it out, ” said Sung Lin, who runs his own business.

They are glad that families can now go out more as the country is slowly reopening and more leisure activities are allowed.

“My son is very happy to be out of the house and see all the animals. We’re very happy that things

are almost returning almost to normal.“We’re also glad that Sunway is also taking all the necessary precautions, ” said Gladys, who is a photographer.

Woo Jia Li, 30, said she and her husband brought their child to the wildlife park as a fun activity.

“We wanted to see the zoo and the animals, as well as get some sun, ” said Woo, whose son is about two years old.

She said this was the first time the family had gone to Sunway’s wildlife park, and they enjoyed themselves.

“As long as they keep it clean, it would be okay but parents will have to take their own precautions.

“It’s a good alternative than for the kids to be cooped up at home, ” she said. 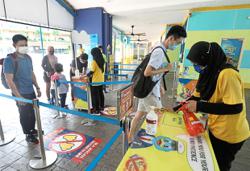 Sunway Lagoon to reopen this Saturday 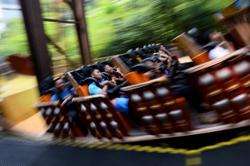