The online competition, themed “Technology and My Future”, was aimed at encouraging the pupils to showcase their creativity on how they imagine they would be affected by future technology.

It is open to Tamil school pupils from Year One to Year Six nationwide.

> Police in Hyderabad, India, arrested four people in relation to a video clip which showed a monkey being hanged, the daily also reported. The monkey was said to have entered a house and fell into a water storage tank.

The man who found the monkey trapped in the tank caught the primate before hanging it on a tree by its neck. 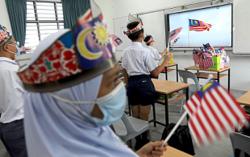