MIRI: The government clinic in the remote Long Lama township within the interior of northern Sarawak is suffering serious structural damage as the ground below it has collapsed.

Huge cracks are appearing on the footpath, roadside and patio of the building, said the Baram Peoples' Action Committee.

Its chairman Philip Jau said the ground collapse is extensive.

"The ground on which the Long Lama clinic is built has sunk. This is causing the cement walls and footpaths at the front portion of the clinic to crack up.

"The clinic is unsafe for use now due to the instability of the building caused by all these cracks.

"Even the road surrounding the building is cracking up. The underground soil has become very unstable," he told The Star on Wednesday (July 1).

He believes that the ground had collapsed due to heavy rain in recent days, and was made worse by poor structural foundation.

"It is clear that the construction of the clinic was poorly done," he said.

Jau said the community leaders there have already alerted the Public Works Department and the local politicians about the latest situation in the clinic.

The Long Lama clinic is located in the Baram district about three hours by road from Miri.

It caters to the population in the lower and central Baram district which has about 35,000 people. 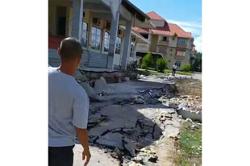 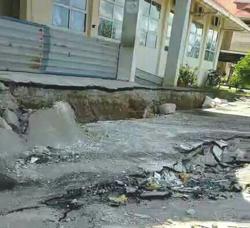 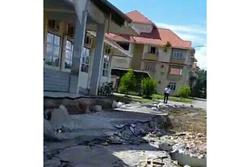