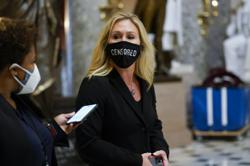 SINGER Wani Kayrie has stopped uploading videos on her social media accounts following a controversy over a TikTok clip of her dancing in blackface, Harian Metro reported.

The TikTok video showed the 20-year-old lass, whose real name is Syazwani Abdullah, dancing to Shh by rapper Young Fanatic with her face and neck painted black.

Wani said she had set all of her social media accounts to private mode to prevent the situation from getting worse.

“Honestly, I still have a phobia to become active back on TikTok. Until now, I have not uploaded anything new.

“In fact, my TikTok and Instagram accounts have been protected and made private as I am waiting for the situation to calm down.

Wani added that her management team was planning to meet TikTok Malaysia to clear the issue.

“My TikTok account was created by them when I joined the reality television show Big Stage.

“So, I think I need to meet them to give some explanations.

“I want the matter to be settled quickly. I do not want to hurt anyone, ” she said.

It was reported that an online petition garnered the support of more than 3,000 people asking a production company to stop the filming of the modern adaptation of Dayang Senandung, which stars Wani as the cursed princess.

Production of the show began months ago and was temporarily suspended due to the Covid-19 pandemic.

The drama is based on the Malay folklore Dayang Senandung, which tells a story of a princess who was cursed with black skin.

She had the curse lifted after giving birth to a child at a castle.

The first television adaptation of it was aired in 1965 and starred veteran actress Sarimah Ahmad.

> The daily also reported that authorities took more than an hour to rescue a trapped Malayan tapir that fell into a quarry in Tupah, Merbok, Sungai Petani.

Kuala Mudah Malaysian Civil Defence Force district officer Kpt Azahar Ahmad said they received information from the public about the incident and the request to rescue the tapir at 12.05am on Saturday.

He said 11 personnel were rushed to the location and found an adult tapir trapped under the water in the quarry.

“We immediately cleared the area and tried to make a safe passageway for it to go out from the area.

“The tapir was not injured, ” he said.