GEORGE TOWN: A High Court here has allowed for a judicial review of a minister’s order allowing companies to repay their debts in six months, as a result of the movement control order (MCO), compared to 21 days.

Justice Datuk Rosilah Yop said there was a prima facie case against the government and granted the application to Wabina Constructions and Engineering Sdn Bhd, which is seeking to challenge the order granting a six-month extension for companies to settle their debts.

This followed the company’s inability to serve a notice to its debtor with the imposition of the MCO.

Senior Federal Counsel Rahazlan Affandi Abdul Rahim, appearing for the federal government, said there was no objection to the leave application for the judicial review.

In its application, Wabina said the Companies (Exemption) Order 2020, gazetted on April 23 during the second month of the MCO, was gazetted without debate in Dewan Rakyat, and was inconsistent with the Companies Act.

It said it effectively exempted all companies in debt from having to pay the creditors for six months.

Previously, a debtor had a maximum period of only 21 days to pay a debt before it is deemed insolvent and liable to be wound up, under Section 466(1)(a) of the Companies Act 2016.

Wabina obtained an adjudication award of over RM7mil against a company known as Seal Properties (KL) Sdn Bhd in February this year.

But with the order, it has been prevented from issuing its statutory notice demanding this RM7mil within the usual 21 days.

On May 12, Wabina named the Federal Government, the Domestic Trade and Consumer Affairs Ministry, its minister Alexander Nanta Linggi, the Companies Commission, and Seal Properties (KL) Sdn Bhd as respondents in the review.

According to Wabina’s counsel Ong Yu Shin, as stated in court, among the grounds of the review being relied on by Wabina was that Alexander had acted unreasonably and over his powers by changing substantive laws in the Companies Act without going through Parliament.

By doing so, the minister had taken over the powers and sovereignty of Parliament. This contravened the Federal Constitution and was deemed an illegal law, he said.

Ong claimed the sudden and blanket prohibition period of six months against legitimate creditors is counterproductive to the economic revival of Malaysia.

He also claimed the order applies retrospectively to jeopardise the substantive rights of all creditors in Malaysia and is therefore disproportional and unreasonable.

Ong is also requesting for the case to be referred to the Federal Court under Section 84 of the Courts of Judicature Act as it concerns constitutional issues.

The court set July 14 for Ong to file the formal notices for the case to be referred to the Federal Court and case management. 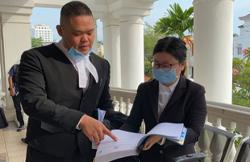