PETALING JAYA: Only the Pakatan Harapan presidential council can decide who the coalition's candidate for prime minister will be, says Khalid Samad (pic).

"After taking into account the views of all its members, the Parti Amanah Negara national committee believes that this question must be decided together at the Pakatan presidential council to ensure consensus and unity in dealing with the matter," the Amanah communications director said in a statement on Tuesday (June 30).

He added the meeting was aimed at resolving whether there was sufficient support in Parliament for Pakatan to form the government.

Khalid said that Amanah would take the matter up to the Pakatan presidential council soon for a decision.

On Saturday (June 27), Dr Mahathir said that Amanah and DAP had proposed Shafie's candidacy as prime minister during a recent meeting.

In response to this, Shafie, who is Warisan president and Sabah Chief Minister, said he would seriously consider Dr Mahathir's suggestion.

However, the move by Dr Mahathir to push Shafie as the prime minister candidate drew the ire of several Opposition leaders.

They insisted that PKR president Datuk Seri Anwar Ibrahim should be given the post if Pakatan came back to power.

PKR secretary-general Datuk Seri Saifuddin Nasution Ismail in a statement on Monday (June 29) said PKR remained open to discussion but the decision must be made by the Pakatan presidential council. 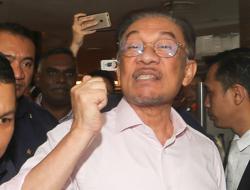