‘Not the time to play politics’

TANGKAK: Prime Minister Tan Sri Muhyiddin Yassin has made it known that he has “no interest to play politics” while Malaysia is still being affected by the Covid-19 pandemic.

He said his priority right now was the health and welfare of the people, as well as the country’s economy and development.

“Many people have asked me why I did not touch on current political issues, ” said Muhyiddin, who is Parti Pribumi Bersatu Malaysia (Bersatu) president.

“I have been in politics for more than 40 years but now is not the time to talk about politics, ” he said at a meet-the-people event here yesterday.

Muhyiddin noted that the government’s decision to reopen the economic sector was not done hastily but based on data and research by various quarters.

“Malaysia’s economy lost about RM2.4bil a day when the movement control order (MCO) was first imposed.

“Even Bank Negara governor Datuk Nor Shamsiah Mohd Yunus told me a worrying news during the Economic Action Council meeting that if the country’s economy is not opened, then the nation’s banking system would lose a total of RM1 trillion, ” he said.

Muhyiddin said he had to be brave and reopened the economy in stages.

“If we do not do it, then our economy would be paralysed, causing many people to lose their jobs, ” he said.

He added that about 95% of the country’s economic sector had since been reopened.

He, however, expressed concern that about a million people would lose employment in the months to come due to effects from the pandemic.

“I have asked state governments and local councils to take proactive measures to ease businesses in their respective areas, ” he added.

For example, Muhyiddin said he asked local councils to speed up the issuance of business licences to traders, as the process would usually take months. 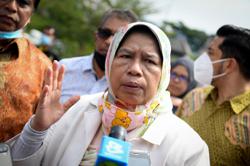 Zuraida: Switching parties is the new norm of politics