PETALING JAYA: DAP's Datuk Teng Chang Khim (pic) has rejected the proposal to have a leader whom he described as being born with a "silver spoon in the mouth".

In a post on Twitter and Facebook, the DAP CEC member and Selangor state exco member said he refuses to be forced to accept someone "mediocre" to lead the nation.

"Don’t shove down my throat to accept a mediocre and born-with-a-silver-spoon-in-the-mouth politician to be a national leader," said Teng, who is also Bandar Baru Klang state assemblyman.

The outburst is believed to be referring to the latest announcement on Saturday (June 27) by former Prime Minister Tun Dr Mahathir Mohamad to put forward his son, Datuk Seri Mukhriz Mahathir, to hold one of the top three national posts should the opposition win in the next general election.

Commenters on Teng's Facebook alluded to Teng's post to be referring to the former Kedah Chief Minister having been proposed as one of the future deputy prime ministers.

Of the three, Mukhriz is seen as the most lacking in political experience and from a well-to-do background being Dr Mahahir's son while his father was prime minister for 22 years.

Teng's statement also seems to be against DAP secretary-general Lim Guan Eng who had agreed with the three being proposed as PM and DPMs.

Lim, however, said that the proposal has yet to be discussed by top DAP leadership and the Pakatan presidential council.

Pakatan Plus is the moniker for a loose coalition that includes Pakatan, the faction in Bersatu being led by Dr Mahathir and Warisan. 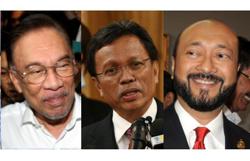 Proposal to push Mukhriz as one of two DPMs criticised