He said the local peranakan Chinese used to prepare savoury halal “dumplings” made of glutinous rice filled with mung beans specially for the kampung folk.

"We used to call it Chinese 'ketupat' as well as 'kuih bacang'," he said while wishing those celebrating the event on Thursday (June 25).

Sulaiman said locals used to join various celebrations of the multiple communities during his childhood.

"Hence, we must revive such spirit here as Melaka is a cultural melting-pot and will also help grow our tourism industry," he said.

The festival is celebrated on the fifth day of the fifth month of the lunar calendar.

The festival is celebrated to commemorate Chinese poet Qu Yuan's death during the Zhou Dynasty in China, more than 1,000 years ago. 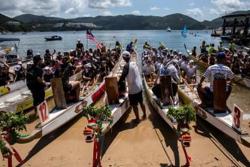