Dumplings without the guilt

All wrapped up: Chiang (right) wrapping the vegetarian dumplings for the Chang festival at his shop in George Town.

Staying true to the authentic recipe, Chiang, 39, who has been running a vegetarian restaurant for the past 10 years, makes the vegetarian dumplings as guilt-free as possible.

“It is a family recipe but my grandmother used to make it using meat and glutinous rice.

“These days, we make it with millet, brown rice and black rice among other healthy ingredients.

“It is however made the old school way and therefore takes a whole day to produce.

“We do not use glutinous rice anymore as we hear it is not good for the elderly,” he said when met at his restaurant here.

Chiang said as the dumplings were homemade, they could only make 200 in a day.

“It is a long process as we have to soak the millet in water for four to five hours, then cook the ingredients and let it cool for two hours.

“It then needs to be wrapped, and we have to make sure it is wrapped well but not too tight.

“Then it is boiled for another six hours and needs to be monitored. As the water will evaporate, we need to keep adding water,” he said.

Chiang added that the dumplings were only done for a month or more each year during the Chang Festival, known as the Dumpling Festival.

“As we have many regular customers, we had informed them that we were taking orders and bookings started coming in.

“Many buy the dumplings to give away as gifts as we offer it packed in a box of eight.

“I know that it is not like the original meat dumpling but this one has a strong following among those who are conscious about health and the environment.

“Many buy it as prayer offerings as well,” he said.

Chiang said many traditional dumpling recipes use a lot of sugar and oil.

“Now people can have something traditional without feeling guilty.

“I realised there is a market for a healthy version of dumplings as many can still indulge and enjoy the traditional dish,” he added.

Chang is traditionally eaten during the festival which falls on the fifth day of the fifth lunar month.

The festival which is celebrated today, commemorates Chinese poet Qu Yuan’s death. He drowned himself to protest against corrupt practices in China more than 1,000 years ago.

After his death, the locals started to throw rice dumplings to prevent the fish in the river from eating his remains.

The festival this year falls today. 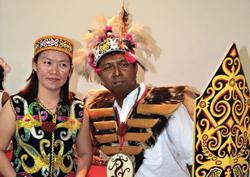