KEPALA BATAS: Two people were killed and three others were seriously injured when the vehicle they were travelling in plunged into a four-metre deep drain at the North-South Expressway near Bertam.

“Both of them died at the scene.

The family from Taiping was on their way to Sungai Petani, Kedah, to visit relatives, when the driver was believed to have lost control of the car. It skidded and plunged into the drain, he added.

“All the victims were trapped in the car. Two of them were rescued by passers-by,” he added.

“Mohd Fairus, who had serious injuries to his leg and hands, and his nephew, Muhammad Faizureen, were sent to the Kepala Batas hospital for treatment, while Muhammad Faizul, who also suffered leg injuries, was sent to Sultan Abdul Halim Hospital,” he added.

He urged those who witnessed the crash to contact the police to facilitate investigation. — Bernama 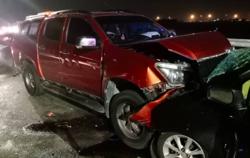