KUALA LUMPUR: Bukit Aman is tracking down individuals and syndicates, which offered "services" on social media, to smuggle illegal immigrants between Malaysia and Indonesia.

Bukit Aman CID director Comm Datuk Huzir Mohamed (pic) said the police through the Anti-Trafficking and Smuggling of Migrants unit (D3) and the Organised Crime Division (D14) are tracking down offers to smuggle Indonesian illegal immigrants back to Indonesia or into Malaysia.

"We received information from illegal immigrants who were detained that syndicates are resorting to offering human smuggling services via social media.

"Besides offering services to send the illegal immigrants back home via the sea routes, agents and syndicates also offered services via Facebook to transport them into Malaysia illegally," he said when contacted on Monday (June 22).

The syndicates charged between RM1,600 and RM3,000 for each illegal migrant, he added.

"We believe the agents and syndicates are operating in Malaysia while having a network of accomplices in the neighbouring country.

"We believe agents and syndicates were desperate to find customers during the movement control order period (MCO) and resorted to offering their services via social media.

"Our increase in patrols along borders and entry points further prevent the syndicates from operating like before," Comm Huzir said.

Investigators are scrutinising information on social media to ascertain the location and routes used by the syndicates, he added.

"We have our ways to obtain information and cannot reveal it to the public.

"Rest assured, authorities are always on alert for human smuggling activities," he added.

Comm Huzir said investigation on offers via social media to smuggle illegals not only focused on Indonesia but other neighbouring countries as well.

It was reported that authorities detected offers to smuggle Indonesian illegals via Facebook.

The activity was conducted by two individuals who offered services to transport the illegals via Johor waters to Batam, Riau and Surabaya.

The individuals also uploaded photos and videos of their successful "operations" on Facebook. 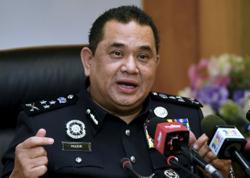