Suhakam: Everyone has a role to play in protecting refugee rights

PETALING JAYA: Anyone can make a difference to promote and protect the rights of the refugee community, says the Human Rights Commission of Malaysia (Suhakam).

It said that everyone has a role to play in dispelling negative views and discouraging untruths about the refugee community.

It expressed disappointment in the rise of online hate speech and xenophobic rhetoric in recent months, and also immigration raids as well as detention of refugees and migrants.

"Attitudes and policies toward refugees and migrants have hardened as the Covid-19 pandemic surged in Malaysia, when instead more compassion and tolerance towards those who are struggling for their survival is needed," it said in a statement on Saturday (June 20), which coincides with World Refugee Day.

Suhakam said it would continue its efforts to increase community awareness about refugee and refugee children rights, as well as to encourage the government to adopt comprehensive, inclusive, non-discriminatory and long-term refugee protection policies.

"Priority should be to grant refugee children access to public education, and those of age should be allowed to seek employment so they may be self-supporting and live with dignity.

"The community deserves the right to access public medical facilities, as they should also have access to justice, when required," it said.

Suhakam also reminded that the principle of non-refoulement guarantees that no one should be returned to a country where they are subjected to persecution, which is considered to form part of customary international law.

They also urged the government to stop the interception and "pushback" of boats carrying refugees, effectively denying their safety to be on land.

"The government should review all policies affecting refugees in Malaysia, ensuring these are positive and consistent instead of ad-hoc in nature," it said, adding that it will not relent in advocating for the accession to the 1951 Refugee Convention.

As of April this year, there are some 177,800 refugees and asylum-seekers registered with UNHCR in Malaysia, with the majority coming from Myanmar. 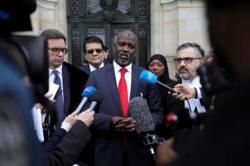