PETALING JAYA: Authorities questioned Siti Kasim at the Malaysian Communications and Multimedia Commission (MCMC) headquarters in Cyberjaya over a social media post she made last month.

The lawyer and activist entered the building at around 10.15am Thursday (June 18) and was questioned for about three hours.

"It went well, and I fully cooperated with them by providing them with all the necessary information.

"We will wait and see if there is a case against me because, apparently, I have upset many people," she said.

It is understood that Siti Kasim was called up over a post on social media in late May criticising PAS' suggestion that alcohol be banned until drink-driving cases were minimised.

She also claimed her words had been twisted by other parties, who used them to spread fake news about her.

"I lodged a police report against them about a week ago because I think they have gone too far," she said.

On June 17, Bukit Aman CID director Comm Datuk Huzir Mohamed said Siti Kasim would be investigated under Section 505 of the Penal Code and Section 233 of the Communications and Multimedia Act 1998.

She was questioned by Bukit Aman's Special Investigations Unit with MCMC's assistance. 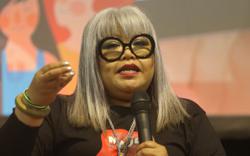 The Week That Was 1h ago