PASIR PUTEH (Bernama): A Rohingya woman was found dead with three stab wounds after she was believed to have been stabbed by her husband in Kampung Gong Baru here Wednesday.

"Police found a knife at the scene that was believed to have been used by the suspect, ” he told reporters at the district police headquarters here Wednesday.

Mohd Azmir said the 32-year-old suspect was arrested at 3pm and remanded to facilitate murder investigations.

He did not rule out jealousy as a motive as the couple was said to have been constantly arguing.

Meanwhile, the couple’s neighbour, Mohd Syeed Azmi Moktul Hossain, 42, said his wife had stumbled upon the victim’s body at the scene.

He said the suspect worked odd jobs and the couple had two children, aged three and four, adding that the family had moved to the village two months ago. - Bernama 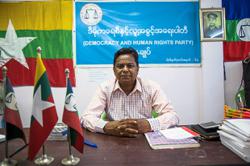