“Yesterday's (Monday) meeting confirmed. There was a meeting from the ‘majlis tertinggi’ PKR. It totally rejected Dr Mahathir.

“I think we prefer to be the Opposition rather than this (deal), ” he told The Star briefly when contacted.

He was believed to be referring to a PKR central leadership council meeting that took place on Monday. The Star could not verify if the meeting had taken place.

Abdullah was responding to a report by Free Malaysia Today, which had quoted an anonymous PKR insider that allegedly, Pakatan would allow Dr Mahathir to serve as premier until the end of 2020, provided a written agreement on a handover to Anwar was made.

It was understood that there is a deadlock amid negotiations currently taking place over Pakatan’s choice for premier.

Anwar’s political aide Farhash Wafa Salvador Rizal Mubarak, when contacted, however, denied the claims in Free Malaysia Today’s report, as he said the matter is currently under discussion.

“PKR would not allow our president to be taken for a ride again, ” he added.

Asked if PKR possessed an adequate amount of MPs in support of Anwar’s bid to be premier, Farhash merely said: "We will know soon”.

Pakatan and its allies were expected to arrive at a decision on Tuesday (June 16) on whether Anwar or Dr Mahathir would be their choice for prime minister, following a meeting last Tuesday (June 9).

The official headcount of Pakatan MPs stood at 107, Anwar said previously, adding that this was based on numbers presented during a Pakatan meeting on Tuesday (June 9).

To perform a successful counter-coup against Perikatan, Pakatan would require a strong majority, as observers have previously said that a razor thin majority would only pave way for another snap polls amid the ongoing Covid-19 economic fallout.

Meanwhile, a highly-placed source said that an offer was made to Gabungan Parti Sarawak (GPS) in recent days by DAP that it would abstain from contesting in the same seats in the coming Sarawak state elections.

It was understood that the offer was made during the “Sheraton Move” in February, but it was rejected by GPS then due to soured ties with DAP caused by a heated debate that took place in Parliament sometime last year.

However, it was understood that the offer is once again on the table, depending on the outcome of Pakatan’s choice for premiership.

“Pakatan has to settle their problem first. Then GPS would move as a bloc in this decision, ” said the source.

GPS has 18 MPs at present, which is the magic number required by Pakatan to garner a strong majority in order to avoid a snap election.

“On paper, Dr Mahathir has already been considered as party-less and no longer has power.”

Dr Awang pointed out that Anwar is the “kingmaker” in this matter, and GPS is needed to complete the equation for a strong majority required by Pakatan to form the next government.

He also said that there isn’t a sitting prime minister in Malaysia who is not a member of a political party.

No walk in the park for Dr M 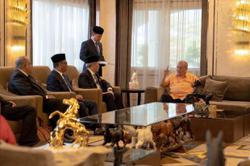