Hue and cry: Residents at The Dales Tambun oppose the land clearing near the foothill of Bukit Panjang.

IPOH: Sahabat Alam Malaysia (SAM) recommends that Gunung Panjang, the site of three land clearing attempts since 2011, is gazetted as a protected area.

SAM field officer Meor Razak Meor Abdul Rahman said the move would provide an assurance that there would be no more land clearing works or development projects on the hillslopes located near a residential area.

“The state should gazette the limestone hill in line with its policy after Kinta Valley was recognised as a National Geopark in 2018.

“It must be said that there are no limestone forests in Perak which have been gazetted as protected area.

“Gua Tempurung is not one as it is used for recreation,” Meor Razak told reporters at press conference yesterday.

Panorama Tambun Perdana residents held the press conference to highlight the issue after noticing earthworks being carried out on the hill slopes on June 4.

“The relevant state authorities will have the jurisdiction to manage and preserve the area if it is gazetted,” Meor Razak said.

Resident Christine Wong claimed that a section of the area was being cleared by a contractor on the pretext of building a fence on land owned by the Perak Islamic Affairs and Malay Customs Council (MAIPk).

She said it was the third time that land-clearing work was being carried out in the area.

Wong said a meeting with representatives from MAIPk and the state Land and Mines Department was held at the Tambun police station on Wednesday to resolve the matter.

“We found out there was no approval from the authorities and the contractor has since been told to stop work until it gets a permit,” she said.

She said residents would oppose development on the hillslope, fearing that it could cause a rockslide.

“We are appealing to the state government to find MAIPk another piece of land.

“This is our third appeal.

“How many more times do we need to do this?” she asked.

Wong also questioned the need to fence up area if it was not being used as a cemetery.

It was reported in 2011 and 2017 that land clearing works were carried out by contractors on the hillslope.

The hillslope was earmarked as a cemetery under MAIPk but has yet to be used for the purpose.

In 2011, an individual allegedly tried to mine iron ore on the hill although claiming that work was for the setting up of a herbs farm.

Gunung Panjang has been certified by the Perak Minerals and Geoscience Department to be rich in iron ore but is sensitive to physical disturbances owing to its geography.

In 2017, a contractor tried to clear the land for a durian plantation project but failed following objections from nearby residents.

Meanwhile, at separate press conference, Perak Mentri Besar Datuk Seri Ahmad Faizal Azumu said he was aware of the issue, adding that necessary action would be taken to resolve the matter. 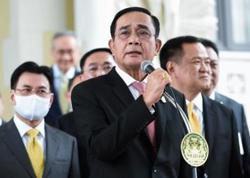