KUALA LUMPUR: About 1,500 traffic police personnel nationwide will be on duty for the expected surge in traffic for the "delayed" balik kampung exodus.

Bukit Aman Traffic Investigation and Enforcement Department (JSPT) director Deputy Comm Datuk Azisman Alias said JSPT elements will be all over the country monitoring traffic flow at all highways as well as main roads, including federal and states road.

"We expect a higher volume of vehicles travelling from Klang Valley to northern, eastern and southern parts of the country tomorrow afternoon (Friday, June 12) and over the weekend.

"With the interstate travel ban lifted, we do expect much more vehicles on the road," he said when contacted by The Star on Thursday (June 11).

The presence of JSPT personnel will certainly be felt by road users as they will be deployed at strategic locations, he added.

"We believe the surge in traffic will be quite normal for the Hari Raya period but our personnel are prepared.

"While there is concern that traffic accidents will increase, we will be all over the country to take the necessary action and be seen by the public," DCP Azisman said.

The JSPT will focus on enforcement on various offences, especially speeding, using the emergency lane and drink driving, he added.

"We want everyone to reach their destinations safely and without any incident.

"We hope the public will cooperate and don't take road safety for granted," he said.

DCP Azisman also advised the public to drive carefully and abide by all traffic laws, rules and regulations.

"Drivers should have ample rest before beginning their journeys and travels. I understand there is excitement due to the permitted interstate travels, but don't be over-excited until you endanger yourselves or others," he said.

Meanwhile, Kuala Lumpur JSPT chief Asst Comm Zulkefly Yahya said its personnel are also ready for the possible surge in traffic on Friday and over the weekend.

"We will focus on traffic congestions at the city centre and public locations as well as city exit points which lead to the north, south and the east coast parts of the country.

"Special operations on drink driving and road menace will also be conducted," he added.

ACP Zulkefly reminded all motorists to be mindful when driving or riding.

"Obey all traffic rules and regulations and always practise safety first while driving. It is not worth it to rush to any destination.

"The most important thing is for you along with your loved ones arrive safely," he said.

This year's Hari Raya Aidilfitri in May was a scaled-down event due to the six-week conditional movement control order (MCO) implemented from May 4 to June 9 to stem the transmission of Covid-19.

Interstate travel was also prohibited during the conditional MCO period except for emergency cases, work commute and spouses who live in different states.

However on Sunday (June 7), Prime Minister Tan Sri Muhyiddin Yassin announced that the interstate travel ban would be lifted beginning Wednesday (June 10), marking the start of the recovery MCO period, which will last until Aug 31. 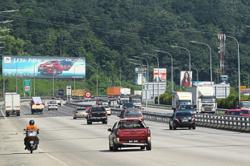