PETALING JAYA: A former senior member of the Star Media Group's security staff has passed away after battling colon cancer.

Rosli Jamaluddin, 60, died in his sleep on Thursday (June 11) at the hospital he had been admitted in since May.

He worked at Menara Star as a security staff member for about 13 years and officially retired on March 11 this year.

He had his contract renewed on March 18

Rosli left behind a wife and three children.

According to his daughter, Adlina Hazwani, he was admitted on May 18 after falling sick due to a blockage in his gallbladder.

“However, after the CT scan, the doctor found a cancerous tumour around the duodenum and because it grew at an unusual spot, they couldn’t perform an operation.

“So he depended on medication, drips, painkillers and oxygen. He passed away last night peacefully in his sleep, ” she said.

Adlina said her father was fond of reading.

“His hobby would be definitely reading newspapers and all sorts of things, as well as watching sports, ” she said. 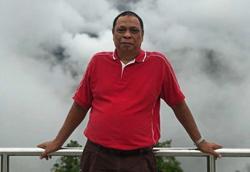