“We have taken statements from the victim and are working with the Malaysia Communication and Multimedia Commission (MCMC) on this matter,” he said when contacted on Monday (June 8).

He said they are investigating the matter under Section 506 of the Penal Code for criminal intimidation and Section 233 of the MCMC Act for sharing offensive and menacing content.

Verdon said he believes this came after his various campaigns against undocumented immigrants via social media including Facebook.

A Facebook user had allegedly posted a picture of a pistol with the words ‘Verdon hahal dibunuh (Verdon can be killed)’ on the Gerakan Solidariti Orang Asal Sabah’s Facebook page. 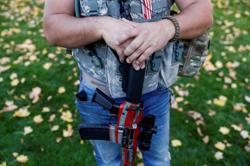