IPOH: The Perak Department of Environment (DOE) has collected five water samples from the drainage system and septic tanks at a housing project in Tanjung Malim, 126km from here, and upstream of Sungai Bernam after receiving complaints from residents of a river pollution.

Its director Rosli Zul said all the samples would be sent to the Chemistry Department for analysis and legal action would be taken if it was found to have exceeded the limits allowed under the Environmental Quality Act.

“I ordered an immediate investigation and we went to the site (on Friday) and collected water samples at five checkpoints from the housing site up to the Bernam River.

“We will take legal action if the results of the chemical analysis of the samples at the final release points exceed the specified limit. We will investigate whether there is any pollution or not, ” he said.

He said the jurisdiction of the DOE was only to regulate the level of pollution as stipulated in the Environmental Quality Act.

Rosli said the Bernam River pollution issue had been raised since August last year and that the developer of the yet-to-be occupied housing project had provided an additional retention pond to the sewage treatment system that had been approved by the authorities based on the recommendations of the complainants’ representative.

“In addition, the developer has also undertaken improvements to the surface runoff water pollution control system as directed by the Perak Department of Environment in January,” he said.

He also asked the DOE to investigate and take appropriate action on the issue. — Bernama 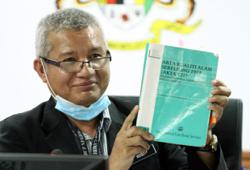 DOE to be given more teeth to go after polluters, says deputy minister