MIRI: A MASwings aircraft with 29 passengers on board made an emergency landing at the Miri Airport.

The flight from Miri to Labuan made an urgent landing around 4.30pm Sunday (May 31) after smoke reportedly filled the cabin of the aircraft.

The Sarawak Fire and Rescue Department said the passengers and the pilots are safe.

The flight from Miri to Labuan took off at 4.05pm but made a turn and called for an emergency landing at 4.30pm.

"It was reported that smoke filled the aircraft cabin while it was flying.

"It landed with all the 29 passengers on board safely.

"The aircraft has been grounded pending investigation," said the department.

The department said that Miri Airport has not given access to fire personnel to check the aircraft.

Preliminary information indicated that there was no fire onboard the aircraft despite the smoke.

MASwings uses the ATR aircraft for its rural air service in Sarawak and Sabah. 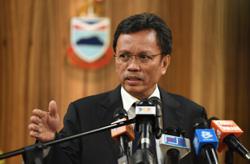