KULAI: A 45-year-old man is expected to be charged at the Magistrate’s Court here with allegedly making a statement ridiculing the approval allowing a 12-person congregation to perform Friday prayers in Johor.

Kulai OCPD Supt Tok Beng Yeow said the man is expected to be charged on June 1 over the statement he made on Facebook that went viral on May 15.

“The suspect came to the Kulai District Police Headquarters to surrender himself on May 19 at about 9am, and the police confiscated his phone.

“He was remanded for three days from May 20 to May 22 and was later released on police bail,” he said during a press conference at the Kulai District Police Headquarters on Friday (May 29).

He added that the man was released on police bail while waiting for reports from the Malaysian Communications and Multimedia Commission's (MCMC) for confirmation that the Facebook account belongs to the suspect.

“We have received the reports from the MCMC on May 28 and we will hand over the reports to the deputy public prosecutor on Sunday (May 31) for further action,” he added.

The case is being investigated under Section 505(b) of the Penal Code for making statements that could cause public mischief, and Section 233 of the Communications and Multimedia Act 1998 for sharing offensive and menacing content.

Tosrin said the individual’s action in uploading the statement had disrespected the sanctity of Islam and violated the order issued by the Sultan of Johor.

“It is in contempt of Islam and a violation of the order decreed by the Johor Sultan because the 12-person congregation was approved by His Highness and decided by the Johor Islamic Affairs Fatwa Committee,” he said, adding that he hoped for an immediate investigation and stern action against the individual.

On May 13, Tosrin announced that the state was allowing 12-person Friday prayers in mosques and surau starting on Friday and throughout the conditional movement control order period. 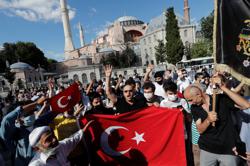