KOTA KINABALU: Sabah Water Department Datuk Amarjit Singh (pic), whose political appointment in 2018 was marred by a legal controversy, has been transferred to the State Economic Planning Unit (Upen).

Sabah Infrastructure Development Minister Datuk Peter Anthony, however, said that Amarjit’s transfer this month had nothing to do with legal and other issues raised over his appointment to the position.

He argued that Amarjit’s expertise as a trained water engineer was needed at Upen, which has put in “long term infrastructure plans” for the state.

In dismissing claims that transfer had something to do with an ongoing legal challenge by former chief minister Datuk Yong Teck Lee, Anthony said that such transfers were also not uncommon among public servants who are moved to different positions as needed.

“He (Amarjit) doesn’t necessarily need to remain in the State Water Department, simply because his expertise can be applied anywhere with his kind of designation. He is a consultant and his service is more needed in Upen, ” he told reporters here Monday (May 25).

Amarjit, a Parti Warisan Sabah member who had never served in the civil service before, was appointed to the role in August 2018, not long after the party took over the state government.

In March 2019, Yong and Tawau businessman Pang Thou Chung challenged Amarjit’s appointment, saying that it contravened the Sabah Water Supply Enactment 2003, which made it mandatory for senior positions to be held by members of the public service.

The Kota Kinabalu High Court last October ruled that his appointment was illegal, but fell short of declaring it null and void.

The Sabah government has filed an appeal at the Court of Appeal on the High Court decision.

Meanwhile, Anthony said that a Water Department officer has been appointed acting director department before the government decides on a new director.

“We need a director who is experienced and can guarantee the quality of the water works services. The department is a very important agency for the people of Sabah and it is time to improve the water service quality, ” he said, adding that there were issues yet to be resolved including water shortages and overcoming water needs in remote areas.

“The federal Rural Development Ministry is usually the one involved in this, but I think it’s time for the state government to work on solutions, ” Anthony said, adding that they hoped to improve the existing system or install water pipes as part of the solution. 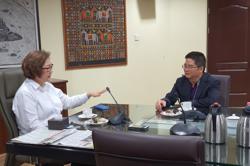