JOHOR BARU: A mall here has been ordered to shut down temporarily following failure to comply with standard operating procedures (SOPs) during the conditional movement control order (MCO).

According to a notice that has been making its rounds on social media, the mall was ordered by the state Health Department to close at about 4pm on Monday (May 25) until June 1.

When contacted, Johor health and environment committee chairman R. Vidyananthan (pic) confirmed that the mall had been requested to close.

"The mall had failed to control the crowd and maintain social distancing among its customers, and did not provide enough hand sanitisers.

"At about Monday at noon, the state Health Department's enforcement team advised the management to rectify the situation, but when a follow-up check was conducted a few hours later, the situation did not improve," he said.

Meanwhile, one of the tenants of the mall, who only wanted to be known as Lee, said a lot of people have been queuing outside the mall since it was allowed to reopen following the relaxation of the MCO.

"We took all the necessary precautions, including checking temperatures of each and every customer, as well as getting their particulars.

"However, it is difficult to control the crowd or impose social distancing among customers lining up outside the mall," said Lee. 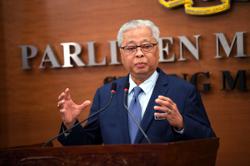