It said Serian, Bintulu and Tanjung Manis have become yellow zones with the new cases detected there.

"Currently, five districts in Sarawak are categorised as yellow zones, while the remaining 35 districts are green zones," the committee said in a statement on Monday.

The other two yellow districts are Kuching and Sibu.

The committee also said three patients had recovered, with two discharged from the Sarawak General Hospital here and one from Sibu Hospital.

In addition, 132 new persons under investigation (PUI) were reported, while 117 PUIs are awaiting their lab results.

The committee also requested all Sarawakian tertiary students who had returned home recently to go for Covid-19 screening in their respective divisions if they have not done so.

"They will be contacted by the divisional disaster management committees. The divisional committees and Health Ministry will also step up their contact tracing capabilities to trace the close contacts of the new positive cases," it said.

The committee added that all students who had been directed to undergo home-quarantine were not allowed to leave home.

It said action would be taken against those found to have breached the home-quarantine order under the Protection of Public Health (Measure on the Carrying out of Activities in Infected Local Areas)(No 2) Order made on May 13 under the state's Public Health Ordinance 1999.

On the coming Gawai celebration, the committee said visiting from house to house or longhouse to longhouse was not allowed. Gawai falls on June 1-2. 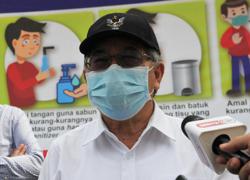